Cllr Dilip Patel was elected as a councillor of Mawney's ward in 2010 and has served as Chairman on many sub committees. He was the Chairman of Strategic Planning and served as Mayor of Havering in 2018-2019. During his time as Mayor, Cllr Patel attended 645 engagements and raised £86500 for three local charities; Havering Mind, Lennox Children's Fund and Rainbow Trust.

Cllr Patel is currently a Governor at Parkland Junior our School since 2014, and was also a Governor at Crownfield Infant School between 2014 and  2020.

Dilip has been a shopkeeper in Collier Row for the last 24 years and through his local business has gained an extensive knowledge of local issues. He is the founding Chairman of the Conservative Policy Forum and Councillor for the Mawneys ward.

Cllr Patel says " I have been running a small shop in Mawney’s Ward for the last thirty years,so in 2014 I thought it’s my time to give something back to the community. I think I have served the community well and would like to continue.

My vision is that I want to see my community has good quality of services from the council." 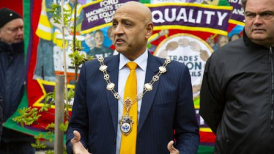