In May 2022 there will be local elections across Havering. This time, will be electing councillors for brand new wards, with new boundaries and names that truly reflect their historic character! For too long, the powers that be have discarded neighbourhood, parish and historic names. Wards like ‘Brooklands’, ‘Pettits’ and ‘Havering Park’ had names that did not represent the true identity of these communities, so change was needed, and I proposed all the changes that have now been adopted.

The Boundary Commission has done excellent work drawing up the new wards, uniting local communities within the same area, with sensible geographical boundaries and names that make sense to local people.

The wonderfully historic name of ‘Havering-atte-Bower’ will, at last, have a ward named after the Village. ‘St Edward's’ is also returning to the map, which is only right, given St. Edward is Romford’s patron saint, along with ‘St. Alban's’, both named after town centre parishes, replacing the old ward of ‘Romford Town’.

‘Brooklands’ ward has gone but has been replaced by the much more appropriate name of ‘Rush Green and Crowlands’, giving both communities equal recognition. ‘Pettits’ is also scrapped, but the new name of ‘Marshalls and Rise Park’ really does represent actual names of the neighbourhoods within that ward, replicating the names of two popular local schools as well.  ‘Mawneys’ ward keeps its name but takes in more of Collier Row.

Squirrels Heath was due for the chop originally, but after my campaign, the ward and this poplar name has been saved, keeping the communities of Gidea Park, Ardleigh Green and Heath park together in one ward.  In Hornchurch, ‘Hylands’ will be renamed ‘Hylands and Harrow Lodge’, naming both local parks that are treasured by our community.  These changes will form part of our electoral map now, probably for the next twenty years, so it was so important to get it right.

I am pleased with the outcome and I hope local people too will be glad to see their local wards, at last being given names we can all be proud of across Romford. 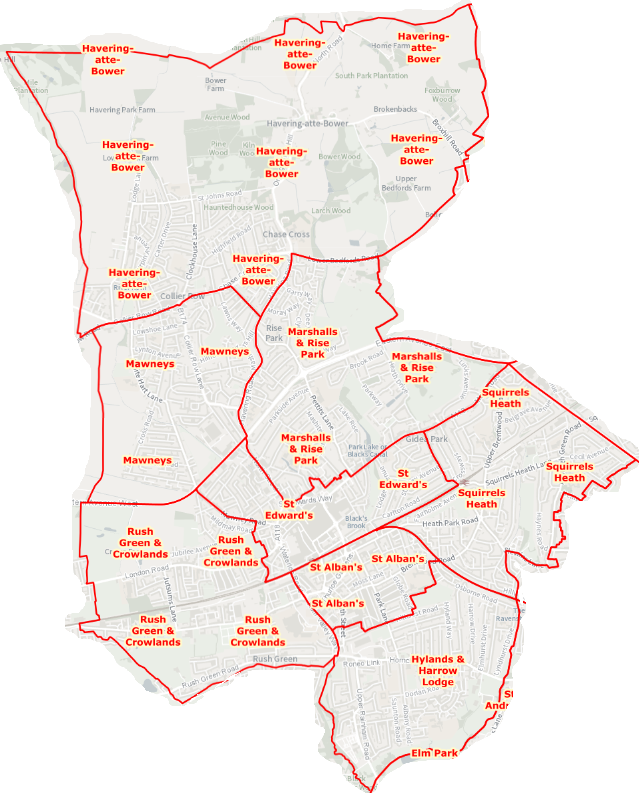